Shortest route to summit of the trip so far, though Almenera tomorrow will turn out to be even less distance to walk.
Driving from Moncoya heading south towards mountains north of Costa del Sol the probably the most difficult part of this summit was getting though Orihuela del Tremedol.
With the benefit of hindsight I now realise the A-1511 actually bypasses the village to the south. However my Sat-Nav had other ideas taking me through the village towards dead ends and narrow streets not wide enough to get my van past parked cars. Eventually I appeared on the west side on the A-2707.
Start point from surrounding main roads was not obvious so for once I used a route posted by Martin Richardson found on peakbagger.com. It was approached from the north down a mountain track which before this trip would not have considered drivable but turned out to be straight forward for a standard road vehicle by driving slowly and carefully.
Following the ATV track and fence west from the cattle grid you soon come to a slope strewn with boulders heading straight for the summit. An easier route however is further to the right picking up an easy to follow shadow of track in pine needles through woods marked by several small cairns all the way to the summit.
Return is back the same way and was back at van before 5pm, leaving plenty of time to head further south and hopefully dryer, warmer weather.
No target campsite - just drive. By 8pm and 200km later, I was south of Cuenca pulling in to Estacio de Servicio BP Moya - Honrubia off junction 168 on the A3/E901. By 10pm I was settled in bed after pizza and a couple of pints in Cafeteria Moya enjoying free overnight parking. One benefit of driving around Spain there is no charge for overnight stays in service areas. 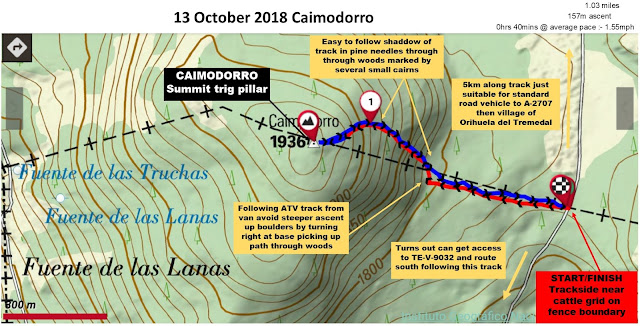