Other walks in Brecon Beacons 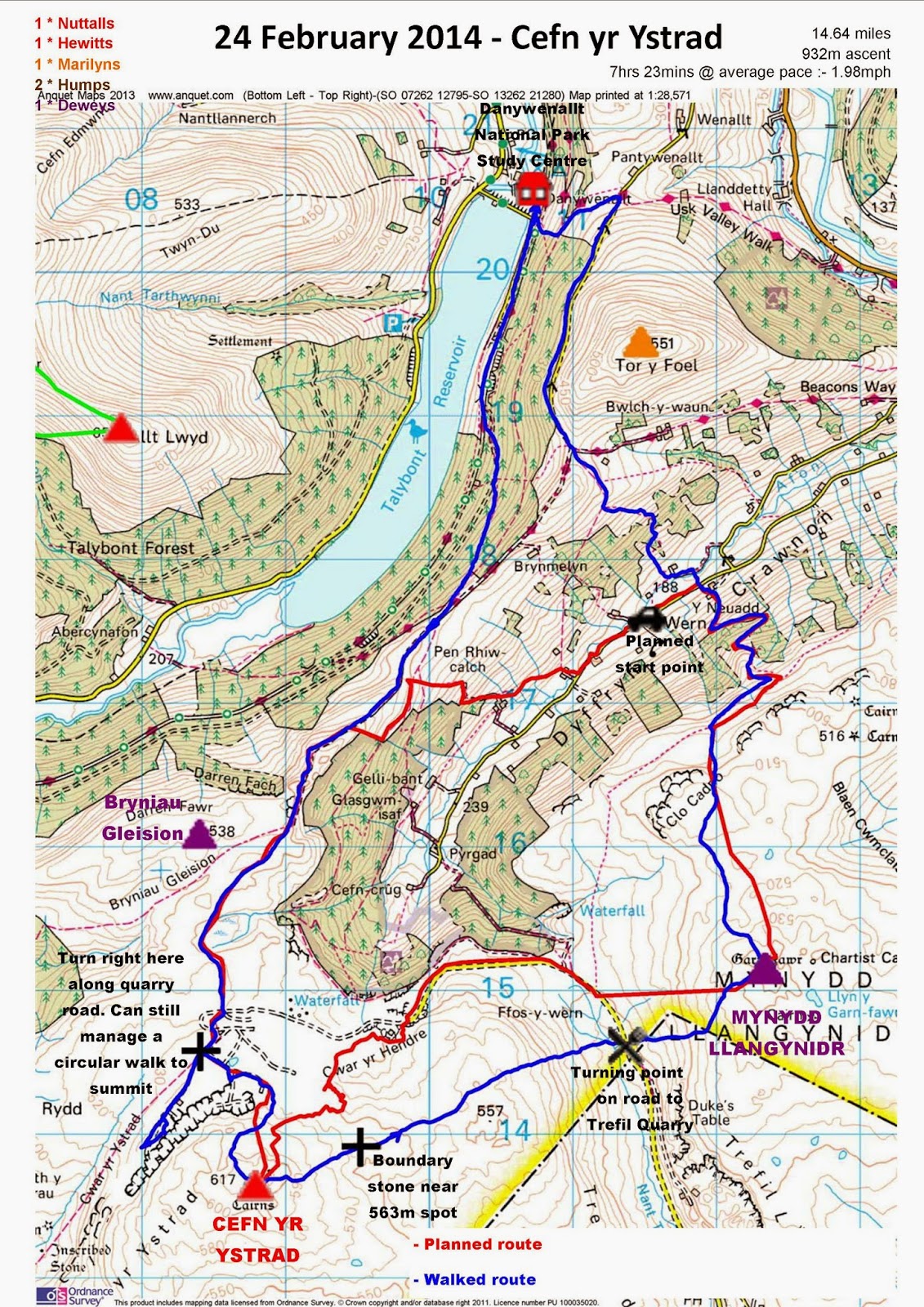 This walk will see me completing all 34 Nuttalls in the Brecon Beacons and Black Mountains but what I have learnt here as with many other areas in the UK I have visited Nuttall bagging it will not be the last time I visit this area.
That is the beauty of peak bagging. It is merely an excuse to visit an area to introduce you to all the places you would not dream of visiting as well as see things you would not otherwise go to see or even know about.

Apart from the hills, of which there are many more, other than Nuttalls, to base a walking route around there are many walks including the Usk Valley Walk and Taf Trail not to mention the Beacons Way along which I have walked several sections visiting the 2000ft tops.
The original plan was to drive round to Wern phone box and start walking from there. However it occurred to me it would take at least 30 minutes to drive there and 30 minutes back so the three extra miles or 90 extra minutes to walk from the Youth Hostel to pick up the route near Bryniau Gleision and then past Tor y Foel on the return from Wern was not too high a price to pay.
There was also a little extra to walk as a result of trying to find a route around the dis-used quarry Cwar yr Ystrad as a concession to my obsession of doing circular walks. Although the 1:50000 map clearly shows escarpments the 1:25000 that I was using only shows dead flat ground devoid of contours or anything else. It was only after trying to find a route round for about 45 minutes I decided to double back and take the direct route to Cefn yr Ystrad summit I should have taken in the first place. As it turned out I was still able to manage a respectable circular route as well.
The extra miles round the quarry were however reduced slightly by the more direct route I took between Cefn yr Ystrad and Mynydd Llangynidr varying slightly from the planned route, mainly influenced by the fact I did not have the electronic 1:25000 map.
Heading for the boundary stone in clear conditions then on to the Mynydd Llangynidr to the Trefil quarry road or a NNE bearing in cloudy conditions really was not too bad over what is fairly uneven ground but down hill.
Overall I was pleased with the decision to start from the Youth Hostel even though it was maybe an extra 2 hours walking it probably would have been close to that driving there and back to Wern, especially as I would have had to change out of muddy clothes and boots to drive home.
In addition the extra part included the route down from Bryniau Gleision I walked with wife and Joss Johnson back in May 2009 and past the descent route from Tor y Foel I did also in May 2009 with the wife and Debbie Alexander. Both walks part of my first visit to The Brecon Beacons as well as full of happy memories.

2.) At hostel entrance you can take the left fork along the Taf Trail or right fork on main road alongside reservoir. I chose the Taf Trail as this was our descent route from Bryniau Gleision mentioned earlier.
3.) Stay on Taf trail ignoring first fork back to direction of travel.
4.) Take the next left fork blocked by boulders off the Taf trail and slightly up hill. This is also the point where the main road alongside reservoir joins the Taf Trail.
5.) Very soon take next left fork of three.
6.) Last time we were on this path was wet and plunged into darkness by the thick canopy. The vegetation was verdant and the path really more like a stream. It is still the same today like a magic forest.
7.) As you clear the forest there is yet another fork and yes take the left one heading up-hill.
8.) At the Brinore Tramroad marker stone near Pen Rhiw-calch, take the right fork keeping fence on your left signposted Dolygaer.
9.) Stay on track passing farm building on the right.
10.) As track veers south look out for Fan y Big beyond Abercynafon to the north west.
11.) Continue south along track along Pen Bwlch Glasgwm to Bryn Cefnog.
12.) Track became very muddy and stayed so for the 1km walk to the quarry Cwar yr Ystrad.
14.) Upon reaching quarry road you have a choice of path straight over hill or road to the right. I went straight ahead and cut the corner off around the hill.
13.) Once on abandoned tarmac quarry road follow it it on a SE bearing then take first junction to left and north of quarry. I went straight on in attempt to access Cefn yr Ystrad from the west, but quarry is very large, so turned back and took above left junction. Still managed a circular route.
14.) As the quarry road turns south and comes to an end take care to pick out path without ascending unnecessarily and descending into large depressions maintaining a steady ascent towards Cefn yr Ystrad trig point.
15.) From trig point walk the final 200m or so SE to summit cairn.
16.) In clear conditions you will see the next summit of Mynydd Llangynidr. Its bulk and the two areas of dead ground makes it look closer than the actual 2½ miles to its summit.
17.) If you can see Mynydd Llangynidr I would suggest walking straight for it on an ENEasterly bearing. Alternatively if conditions are not clear it may be the best option to head NNE for the path around the quarry edge then turn right and follow it all the way to quarry roads and then on to B road used to access Cwar yr Ystrad.
18.) On the EN Easterly bearing you will quickly come across a cairn marking the crash site of Wellington T2520 crash site.
19.) Continue descent along vague path in EN Easterly bearing and start re-ascent to 563 spot height and boundary stone.
20.) Although there is a vague path heading in the right direction it does disappear from time to time, so keep your eye on the summit cairn if conditions allow and when you can see it head for the turning point for Trefill quarry. I took advantage of one of the large boulders there to shelter and have lunch.
21.) Near the lunch stop there is an obvious and for me muddy path to the east up to Mynydd Llangynidr.
22.) As the rate of ascent levels out to the summit plateau, which is in fact near the county boundary follow the path to the left and continue to the summit.
23.) From the summit there is a path to follow just west of north. Take care to not veer to far west, even commit to leave the path and walk through the heather if you think you are going too far off line.
20.) Gap in Clo Cadno