Other walks in The Black Mountains
Route 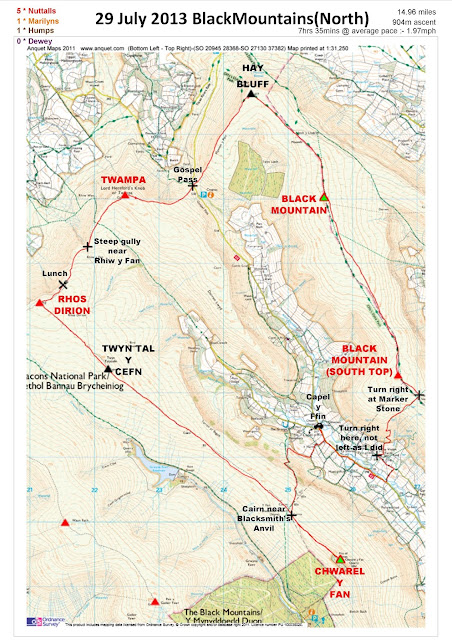 This walk would include visiting the first of the 190 Welsh Nuttalls and unlike its equivalent English cousin (Simon Fell) back in October 2008 I was setting off with the clear intention  to visit all 190 over the next few years.
Yesterdays walk up Mynydd Troed and Mynydd Llangorse had taken more out of me than I would care to admit to myself, but it had given me an insight in to the type of clothing I could get away with for warm showery summer walking and what I needed in my day sack in terms of spare clothing. i.e light waterproof jacket, backed up by spare dry clothing if I had to stop for any length of time to avoid chilling down.
Most satisfying was I avoided becoming temporarily misplaced for the entire walk. Well apart from turning right instead of left on the road near The Vision Farm and that was because of a gate across the road made it appear to be a private road without confirming my location on the map.
Other than getting soaked by the first shower somewhere between Chwarel y Fan and Twyn Tal-y-Cefn due to photographing the obviously approaching shower instead of getting out my waterproof, a second shower on Hay Bluff and onset of a painful left shin on the steep descent from Black Mountain (South Top) there is nothing else to report.
Lessons

Walk Description
1.) Head south over bridge in Capel-y-Finn on the road to Abergavenny.
2.) Turn right off road at first barn and go through left gate.
3.) Keep wall on your right and continue more or less straight on the Y-Fferm
4.) Continue with fence on right until open access land
5.) Turn right and follow open access fence boundary until you reach bridleway heading up hill. In hindsight it would have been simpler to have picked this bridleway up from The Grange by heading north on the road out of Capel y Finn away from Abergavenny.
6.) Turn left on to bridleway and follow up hill along steep zig-zag path to the cairn at the summit plateau.
7.) Continue following path to cairn to the left of Blacksmith Anvil (stone). I never did find this stone though I did not take any time to look for it.
8.) Ahead and to your left you will see a long ridge with a summit at each end. Chwarel Y Fan is the furthest one away.
9.) From Chwarel Y Fan cairn return to Blacksmith's Anvil along the same path.
10.) Continue past Blacksmith's Anvil descending to col on the way to Twyn Tal-y-Cefn.
11.) Pass Twyn Tal-y-Cefn cairn descend a little, and continue to Rhos Dirion trig point.
12.) From Rhos Dirion follow the well defined path NW and head for The Gospel Pass
13.) After crossing the Abergavenny to Hay-on-Wye road head NW up the steep path to Hay Bluff trig point.
14.) Just before Hay Bluff you will have joined The Offa's Dyke Path, continue to the SW away from Hay Bluff along The Offa's Dyke Path to Llech y Lladron.
15.) Press on along Offa's Dyke Path over flag stones to Black Mountain summit.
16.) Staying on Offa's Dyke Path continue to Black Mountain South Top.
17.) From Black Mountain South Top follow Offa's Dyke Path for a further 275m until you reach a marker stone to Capel y ffin.
18.) Turn right at the cairn and head SW off the summit plateau.
19.) At the next stone marker to Capel y Ffin follow the sign to the left as directed by marker. I suspect going right also works.
20.) Follow obvious path down hill, turning back and forth to minimise rate of descent. Early August I was confronted by 4 - 5 ft fern some of which was fairly thick, though I suspect this will not be the case in Winter, Spring & Autumn. Look out for lovely view along Vale of Ewyas.
21.) Follow sign for legally diverted footpath off open access land and descend to style before reaching access road to Blaenau, Ty'r-onen & The Vision Farm.
22.) Ignore sign to Haye road to the left and turn right along road through the gate to Ty'r-onen & Blaenau and then on to Capel y Ffin
23.) As you can guess I followed the sign rather than check location on map then turned right on to a bridleway which was actually a stream. Crossed a footbridge and reached Haye-on-Wye to Abergavenny road.
24.) Turn right and follow road to Capel y Ffin.