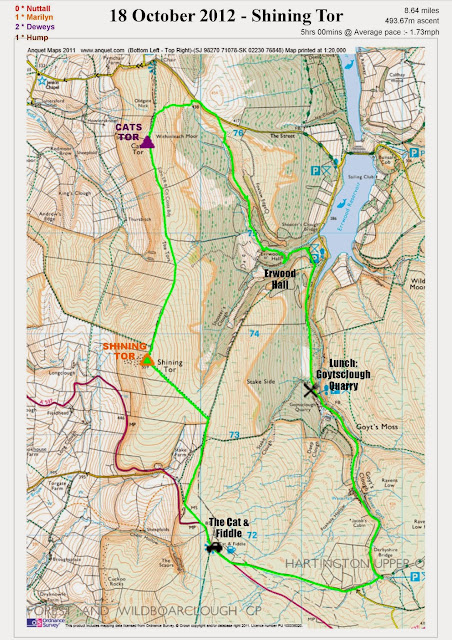 22.) At the fork take a sharp left, descending for a short while then an to a wooded path.
23.) Eventually you will come to a clearing and see Erwood Reservoir on your left.
24.) Very soon you reach a cross roads in the path with a signpost. Follow sign to Goytsclough Quarry and join the public road.

25.) It is now public road all the way back to The Cat & Fiddle and walks end but that is 2½ miles away.
26.) First we stopped for lunch at Goytsclough Quarry where we had lunch and was able to shelter from rain which had just started.
27.) After lunch and near the quarry we passed what looked like a bridge to nowhere but in fact I think it is the Old Packhorse bridge that was moved when Erwood reservoir was built.

28.) Stay on the road along the Goyt valley, crossing Derbyshire Bridge, until a junction with public conveniences on the left.
29.) By now the rain which started at lunch had really set in, so from here it was a case of turning right at the toilets, getting our heads down and following the road until it joins the A537.

30.) The walk is never over until it is over but on joining the A537 all that remains is to remember your road safety and stay on the footpath at the side of the road the short distance to The Cat & Fiddle pub walks end and destination for tonight's meal and well earned pint.