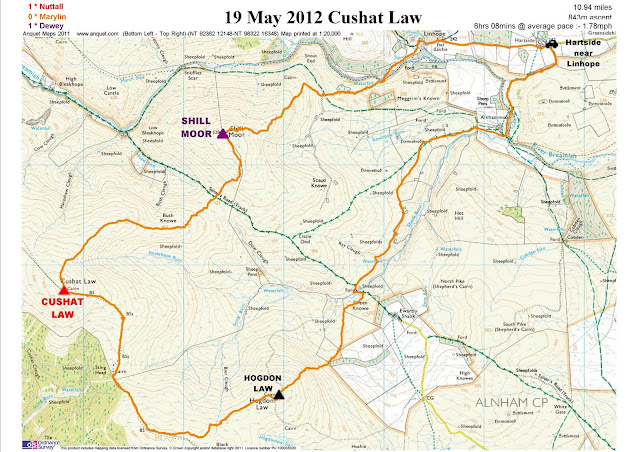 With Chelsea playing Barcelona in the Champions League final, an early start was needed to ensure the nearly 13 miles planned walk (South Cheviots) could be completed in the scheduled 8 hours. This would allow plenty of time to be finished, home and showered in time to get a good seat in the pub well before 7pm. Unfortunately the early(ish) start of 09:40 was not really early enough.

No worries there was always the contingency to cut the walk short by returning directly home from Bloodybush Edge. More importantly I was being joined by my good friend John Parkin, a local from the North East, whom I met in Kettlewell last April 2010. I had experience of chasing him round the fells keeping up with his relentless pace on an earlier walk where we had met up before to walk Bowscale and Bannerdale Crags in the Lake District back in November 2010, so 8 hours to cover 10 - 13 miles will be plenty.

Without further ado we set off from Hartside along the road for Linhope, while I quickly gained my bearings making a mental note of the two prominent peaks in view which I took to be Cushat Law on the left and Bloodybush Edge more or less straight ahead. John set off at his usual pace. This was an incorrect assessment and ultimately a costly one which would cause us to go up the wrong hill.

In no time we reached the pretty village of Linhope and passed through the other side to see a track either side of the River Breamish and the prominent bump of Rito Hill. We wanted to be on the track on the other side of the river and since we missed the path to the first crossing I pointed to the next crossing explaining to John that was where we wanted to be. Walking between Rito Hill and Meggrim’s Knowe we followed the track to Salter’s Road where we then continued to Schill Moor summit, but over grass land up the easiest gradients by eye. I was reminded of John’s pace and used the excuse of taking photos to grab a breather. The next time I caught him was at Schill Moor trig point where I got out my smart-phone to confirm our location and reset the route tracker. What I took to be a sarcastic comment from John about our location, whilst he smugly held his map embarrassed me in to stuffing it in to my pocket and getting out my map.

Looking at the 2 prominent peaks ahead and to the left we decided to head for what we thought was Bloodybush Edge then turn left for Cushat Law. Unfortunately the first peak we headed for was Cushat Law. After the descent from Schill Moor it was fairly straight forward though wet and squelchy to follow the quad bike track up the tongue towards the summit. It was hard work, especially at John’s pace but after about 30minutes the track disappeared and we made our over a few small hags and groughs before reaching the summit plateau on the way to the cairn, where we saw the fence beyond the top and happily sat down for lunch. I even took several photos, confirmed our location and convinced myself we were on Bloodybush Edge.  What I failed to spot was that there was not a trig point. My excuse – well I thought I knew where we were (so I did not need to risk the embarrassment of referring to my smart-phone) and also it was close to 0⁰C with the wind chill, so I did not spend too long scrutinising the map and more importantly the fence lines. It was sufficient for me that there was a fence and that we should follow the fence to the left in generally an Easterly direction. In addition John agreed with me that we follow the fence to the left.

So immediately after lunch we set off following the fence to the left and looking across to the left at the next top and what we thought was Cushat Law. I looked on the map for the boundary stones and could not see any, so I assumed they had not been marked, when a fence junction appeared at Sting Head I convince myself that was not on the map either. Finally when the track started to drift away from the fence I convinced myself I would rejoin it later. Even when the path disappeared and the fence did not reappear I was not perturbed. John’s pace had slowed down, for which I was grateful, and I could see a prominent cairn ahead.

I reached the cairn first and this time I took out my smart-phone to reset the route tracker. By now John had joined me and sat down at the other end of the cairn. I decided I would put up with the embarrassment and confirm where I know I am. I looked at the green dot and to my confusion saw it was near Hogdon Law. Where on earth is Hogdon Law? Well it ain’t near Cushat Law. I passed the news on to John “Well I thought you knew we were at Cushat Law for lunch”, he says. ‘”What” I thought - We both decided to do Bloodybush Edge first”’. “Well I thought you being a local lad knew where Bloodybush Edge was.” The blame game simmered a while longer then we weighed up our options. Going to Bloodybush Edge was a non starter; a) because we were tired, b) we did not have enough time and be back in time for the Chelsea game and c) it was too bloody far”.  We therefore decided to head home crossing Shank Beck at Salters Road then following the Beck back to Alnhammoor where it joins the River Breamish then on to Hatside ,while at the same time I was wondering how I could alter tomorrow’s route to include Bloodybush Edge.

Anyway, as we joined the private road to Alnhammoor to Hartside and the parked cars came in to view all this was forgotten. It was a great walk even though we did need our winter base layers (in May) on the tops as well as ending up on the wrong hill. This was the second time for me this year (Uldale Head instead of Linghaw) so the lesson to learn again is - to take plenty of time at the start of walk to take correct bearings, obvious really. But the big lesson is to read the map as though you are on your own and not to rely on anyone else other than confirm their agreement.