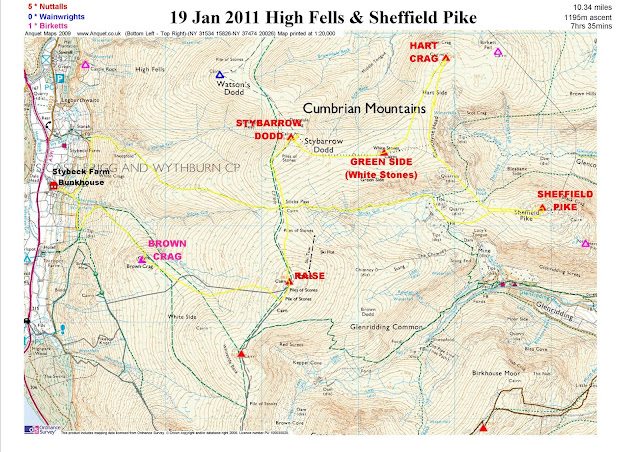 Walk desription
The original planned walk was a one way trip from the bunkhouse at Fisher Place  to Glenridding, taking in Watsons Dodd, the tops on Watermillock Common and finishing with Heron Pike and Glenridding Dodd as part of the descent to Glenridding. This route would have taken in all outstanding 2000ft tops as well as many of the minor tops. The return would have been by taxi and would have taken over an hour by the time it had come to pick us up and return us home via Pooley Bridge and Keswick.
It was therefore decided to concentrate on completing the Nuttalls only; based on a circular walk starting and finishing at Stybeck Farm Bunkhouse with a turning point at Sheffield Pike. Both the distance and ascent would be about the same; however a significant part of the ascent would be at the end of the walk over Sticks Pass.
As we were staying at Stybeck Farm the owners gave us permission to cross their land to the footpath that runs along the wall line on the west side of the Helvelyn range.
We picked up the path at the unmarked footbridge over Fisherplace Gill just above the falls and followed the wall only a short distance until we were nearly level with The Kings Head on the A591 below. We then turned west and uphill towards the first top of the day - Brown Crag. As we reached the brow of the ridge leading to Brown Crag we could see for the first time the high fells covered in ice on the other side of Brund Gill.
A quick detour uphill to bag Brown Crag allowed us to plot the route to the top of the Helvelyn ridge. The chosen route was to the south of Brund Gill leading us to the south side of Raise which meant when we turned north on the ridge path we would bag Raise on the way to Sticks Pass. At the bottom of the climb it was clear and sunny but as we ascended the tops would disappear in cloud and fog. The ascent was straight forward enough and once we reached the ridge path it was straight forward following the path north to the cairn on the top of Raise which I had last visited last September in clearer conditions.
From here we continued north and as we descended and dropped below the cloud line we could see Sticks Pass and Ullswater just behind Sheffield Pike, the remaining tops were still in cloud and remained hidden.
Dropping down to Sticks pass we could the Ski lift on the right and as we headed up again towards Stybarrow Dodd the ice and cloud returned and we found the cairn only by following the cairns. From here we could have turned left and west to bag Watson’s Dodd but I did not suggest we did and Clive did not remind me so we concentrated on get our bearings to head to the next 200ft top - Greenside. Because the path was not obvious and because we did not concentrate too well on walking on a bearing we had a couple of attempts to head off in the right direction. On returning to Stybarrow Dodd cairn twice we finally headed in the right direction and again as we dropped below the cloud saw Greenside ahead and Sheffield Pike beyond.
This is the part of the walk I enjoy best, when you have done all of the climbing and walk along the ridge paths between each of the tops bagging the days peaks.
Today was especially good because the cloud cleared and views to the east were exceptional. After Greenside and photos it was NE to Hart Side. From here we could see Cross Fell plateau covered in Snow with the white radar dome to the right on Great Dun Fell. Another easy walk down hill to the col followed by a gentle climb to the top. The next and last top would be Sheffield Pike which was clearly visible across Glencoyne. It was only 1½ miles around Glecoyne Head down to Nick Head and finally up again to Sheffield Pike. From here we had excellent views north along Ullswater and could see our return route west along Sticks Pass. By the time we had reached Sheffield Pike and enjoyed the views as well as a rest it was 2:30pm and time to head home.
From Sheffield Pike it was a 4 mile walk back to the bunkhouse and at 2mph would mean we would be home by 4:30 well in time before dark. The descent did not follow any path and as we crossed Nick Head could see a footbridge to the south and abandoned quarry works. We knew this was where the path to Sticks Pass went and headed towards the footbridge until we headed west through the quarry to pick the path up along the north of Sticks Gill. The route home would now be easy to follow as no doubt it had been trod for hundreds of years linking Thirlmere with Ullswater. There was not much ascent for the first km only about 50m but this changed for the last 750m and final ascent to the brow of Sticks Pass slowing the pace to well below 2mph. This should not really have been a surprise as the ascent was over 150m a 1 in 5 gradient.
Continuing ahead along the brow of the ridge we then started to descend and could soon see Thirlmere and then Fisher Place. At this point there was still 1hour of walking and we arrived back at the bunkhouse just before 5pm. slightly later than planned but still in daylight - just.
Posted by Steve at 18:41