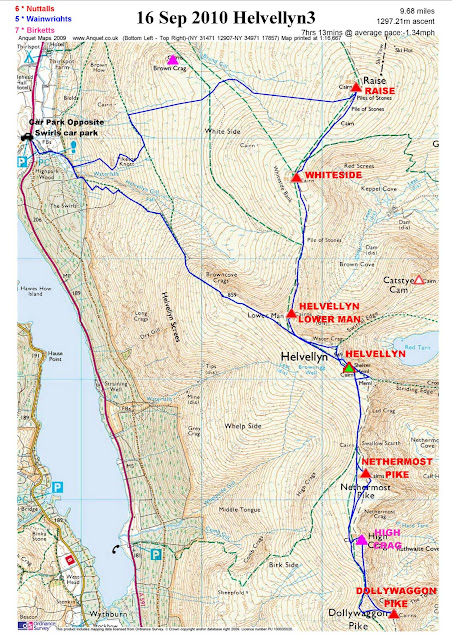 Walk Summary
This was my third and David's second attempt on Helvellyn with our very first walking trip in the Lakes back in November 2008 being forced back by that years first driving snow at High Spying Howe, the summit of Striding Edge. Along with my subsequent lone attempt the following January 2009 with thick snow on the ground, but more importantly low visibility and strong south easterly winds pushing me towards possible cornices and the edge between Browncove Crags and Helvellyn Lower Man.
The start point was the same as January 2009 for the very same reason. The approach to Helvellyn summit avoided the traverse of Striding Edge and although it was not as cold as before by the time we reached Browncove Crags it was cold enough to have to fish out our fleeces and wind proof coats from our backpacks. Black clouds told us rain was never far away and for a brief time we actually put on our gloves in spite of it being September. always carry spare warm waterproof clothing in your day pack, including hat and gloves - whatever the time of year.
We headed straight for Helvellyn summit bypassing Lower Man, knowing we would pick it up on the way back. The same applied to Nethermost Pike as we headed for High Crag (Grisedale) from Helvellyn.
Before turning back for home from Dollywaggon Pike we found a nice sheltered spot to enjoy the September sun as well as fantastic views down Grisedale and across to Fairfield, always keeping an eye on the black clouds and rain showers over Lake Windermere.
Returning from Dollywaggon Pike we bypassed High Crag, picked up Nethermost Pike then returned to Helvellyn shelter then cairn to make up for the previous times we had missed out. The view from here towards Ullswater beyond Striding Edge is absolutely brilliant. I look forward to walking from that way when  I return to bag Catstye Cam and complete the double traverse of Striding Edge and Catstye Cam.
From Helvelyn we returned past Swirral Edge and on to Helvellyn Lower Man. I was tempted to pull in Catstye Cam but Dave was not keen and as always the rule is only go somewhere where everyone in the party is happy and prepared to go.
As it turned out this was fine. It has provided me with a suitable candidate to save as one of my last English Nuttalls and left time to pull in Whiteside and possibly Raise.
From Helvellyn Lower Man we indeed went on to Whiteside and also pulled in Raise, though this was not absolutely necessary as I had a frostier repeat visit in January 2011.
With photos complete on Raise all that was left was to head back to the car park. As is often the case this is not always the most straight forward part of the walk having to avoid steep ground above Thirlspot Farm finding a suitable line of descent past Piketoe Knott. We were restricted heading further west due to the ravine like feature cut by Helvellyn Gill.